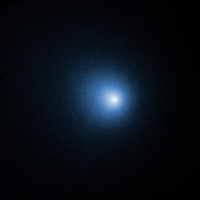 On December 13th, NASA’s Hubble Space Telescope photographed comet 46P/Wirtanen, a periodic comet that orbits the Sun once every 5.4 years.

A new study reveals that, contrary to first impressions, Rosetta did detect signs of an infant bow shock at the comet it explored for two years – the first ever seen forming anywhere in the Solar System.

A special visitor is crossing the sky: Comet 46P/Wirtanen, sighted with telescopes and binoculars in recent weeks, is on the way to its closest approach to Earth this weekend, when it might become visible to the naked eye.

See a Passing Comet This Sunday

On Sunday, Dec. 16, the comet known as 46P/Wirtanen will make one of the 10 closest comet flybys of Earth in 70 years, and you may even be able to see it without a telescope.

A hyperactive comet is approaching Earth 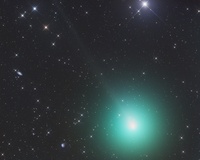 Small but hyperactive Comet 46P/Wirtanen is approaching Earth and could soon become visible to the naked eye. On Dec. 16th, the kilometer-wide ball of dirty ice will be less than 11.5 million km away--making it one of the 10 closest-approaching comets of the Space Age. It already looks magnificent through amateur telescopes. 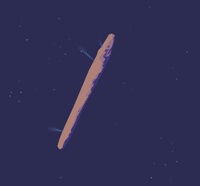 The first known interstellar object to visit our solar system -- named 'Oumuamua -- was detected in October 2017 by Hawaii's Pan-STARRS 1 telescope. But it was too faint for NASA's Spitzer Space Telescope to detect when it looked more than two months after the object's closest approach to Earth in early September. That 'non-detection' puts a new limit on how large the strange object can be, astronomers now report. 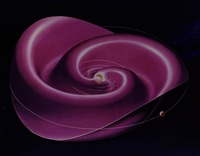 Combined observations of Comet McNaught -- one of the brightest comets visible from Earth in the past 50 years -- have revealed new insights on the nature of comets and their relationship with the Sun. 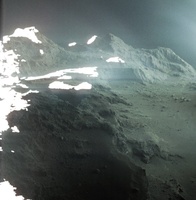 On 30 September 2016, ESA’s Rosetta spacecraft came closer than ever to the target it had studied from afar for more than two years, concluding its mission with a controlled impact onto the surface of Comet 67P/Churyumov-Gerasimenko (67P/C-G).

Using data from ESA’s Gaia stellar surveyor, astronomers have identified four stars that are possible places of origin of ‘Oumuamua, an interstellar object spotted during a brief visit to our Solar System in 2017.

The Comet Observation Database (COBS) [1, 2] is a unique web service that enables comet observers to submit, display and analyse comet data in a single location. The service currently represents one of the largest databases of comet observations (containing more than 235,000 observations) and is available to comet observers worldwide.

This paper introduces the main functionality of the COBS database [1, 2] that is of interest to a comet observer, with application to C/2004 R2 (Machholz).

On Sept. 10th, Comet 21P/Giacobini-Zinner ("21P" for short) will make its closest approach to Earth in 72 years--only 58 million km from our planet. This small but active comet is easy to see in small telescopes and binoculars as it shines like a 7th magnitude star. Michael Jäger of Weißenkirchen, Austria, sends this photo of 21P passing through the stars of Auriga on Sept. 7th. 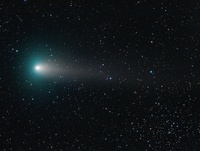 Comet 21P/Giacobini-Zinner is approaching Earth. On Sept. 10th, it will be 0.39 AU (58 million km) from our planet and almost bright enough to see with the naked eye. Already it is an easy target for backyard telescopes.

The cautionary tail of Comet Swift–Tuttle

Comet Swift–Tuttle, formally 109P/Swift–Tuttle, is an enormous, icy comet on a 133 year orbit around the Sun, and the reason for the spectacular annual Perseids meteor showers on Earth. 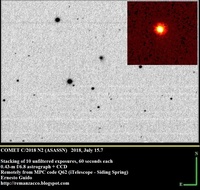 Molecular oxygen in comet's atmosphere not created on its surface 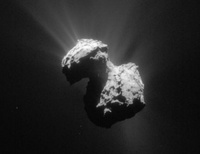 Scientists have found that molecular oxygen around comet 67P is not produced on its surface, as some suggested, but may be from its body.