We have received a confirmation for some abbreviation keys currently assigned by COBS team from the ICQ.
Please use the new ICQ assigned and confirmed keys for future observations.

New research has found evidence that Earth's early continents resulted from being hit by comets as our Solar System passed into and out of the spiral arms of the Milky Way Galaxy, turning traditional thinking about our planet's formation on its head. 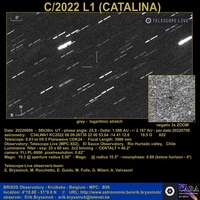 CBET 5134 & MPEC 2022-L97, issued on 2022, June 13, announce that an apparently asteroidal object discovered on June 4 with the 0.68-m Schmidt reflector of the Catalina Sky Survey has been found to show cometary appearance by CCD astrometrists elsewhere after the Minor Planet Center posted it to the PCCP webpage on the basis of a comet-like orbit.  The new comet has been designated C/2022 L1 (Catalina). 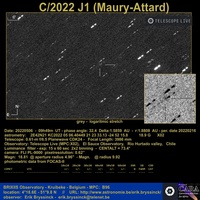 Astronomers using a fleet of world leading telescopes on the ground and in space have captured images of a periodic rocky near-Sun comet breaking apart. This is the first time such a comet has been caught in the act of disintegrating and could help explain the scarcity of such periodic near-Sun comets.

ESA’s Comet Interceptor mission to visit a pristine comet or other interstellar object just starting its journey into the inner Solar System has been ‘adopted’ this week; the study phase is complete and, following selection of the spacecraft prime contractor, work will soon begin to build the mission. 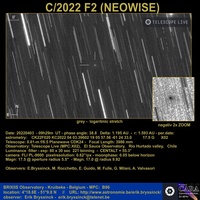 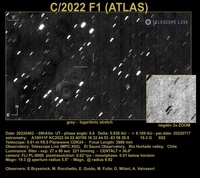 NASA's Hubble Space Telescope has determined the size of the largest icy comet nucleus ever seen by astronomers. The estimated diameter is approximately 80 miles across, making it larger than the state of Rhode Island. The nucleus is about 50 times larger than found at the heart of most known comets. Its mass is estimated to be a staggering 500 trillion tons, a hundred thousand times greater than the mass of a typical comet found much closer to the Sun. 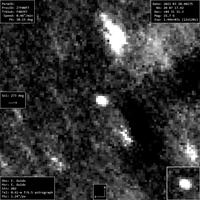 CBET 5111 & MPEC 2022-F13, issued on 2022, March 21, announce the discovery of an apparently asteroidal object (magnitude ~17) discovered on CCD images taken on Mar. 2 UT with a  1.2-m f/2.4 Schmidt telescope at Palomar in the course of the  "Zwicky Transient Facility" (ZTF) survey (MPC code I41). Subsequently, it has been found to show cometary appearance by CCD astrometrists elsewhere. The new comet has been designated C/2022 E3 (ZTF). 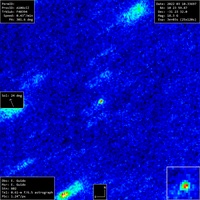 CBET 5109 & MPEC 2022-E227, issued on 2022, March 15, announce the discovery of an apparently asteroidal object (magnitude ~19) discovered on CCD images taken on Mar. 7 UT with a 0.5-m f/2 Schmidt reflector at Rio Hurtado, Chile, in the course of the "Asteroid Terrestrial-Impact Last Alert System" (ATLAS) search program. Subsequently, it has been found to show cometary appearance by CCD astrometrists elsewhere after it was posted on the Minor Planet Center's PCCP webpage. The new comet has been designated C/2022 E2 (ATLAS).

When the European Space Agency's Rosetta spacecraft discovered abundant molecular oxygen bursting from comet 67P/Churyumov-Gerasimenko (67P) in 2015, it puzzled scientists. They had never seen a comet emit oxygen, let alone in such abundance. But most alarming were the deeper implications: that researchers had to account for so much oxygen, which meant reconsidering everything they thought they already knew about the chemistry of the early solar system and how it formed.

Comets’ heads can be green, but never their tails. After 90 years, we finally know why

A study has solved a 90-year-old mystery by proving the mechanism by which dicarbon -- the chemical that makes some comets' heads green -- is broken up by sunlight. This explains why the vibrant green color never reaches the comet's tail.

Recently we have observed a rapid change in brightness of comet C/2021 A1 (Leonard). Magnitude of this comet should be strongly enhanced by forward scattering around 14. and 15. December 2021 and the days around this date. However observations indicating possible outburst near this date. 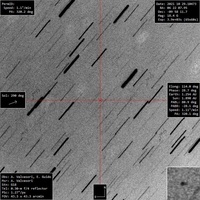 To watch a comet form, a spacecraft could tag along for a journey toward the sun

A new article proposes that space probes could hitch a ride with 'centaurs' as they become comets. Along the way, the spacecraft would gather data that would otherwise be impossible to record -- including how comets, Earth-like planets, and even the solar system formed. 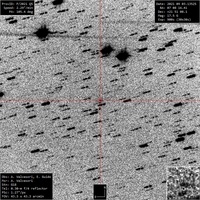 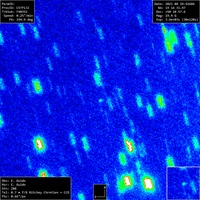 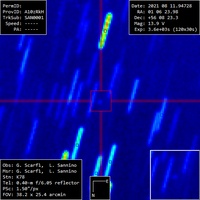 Interstellar comets like Borisov may not be all that rare

Astronomers calculate that the Oort Cloud may be home to more visiting objects than objects that belong to our solar system.