Recently we have observed a rapid change in brightness of comet C/2021 A1 (Leonard). Magnitude of this comet should be strongly enhanced by forward scattering around 14. and 15. December 2021 and the days around this date. However observations indicating possible outburst near this date.

Artyom Novichonok reported for Dec 14.93 a magnitude 2.6 for comet Leonard. A problem with Earth based observations are that there was predicted maximum for so called forward scattering enhancement for same day. However existence of outburst was independently confirmed by two other reliable sources. Nicolas Biver reported a increase of water production as measured on Nancay radiotelescope from 1.8 tons/s (Dec 13.5) to 6 tons/s (Dec 15.5), this measure can't be affected by forward scattering by any way. Second independent confirmation came from Karl Battams who posted a video from SECCHI/HI-2 camera on STEREO-A, which clearly shows increase of activity on Dec 14. I note that forward scattering enhancement doesn't take place from viewing angle of STEREO-A spacecraft. 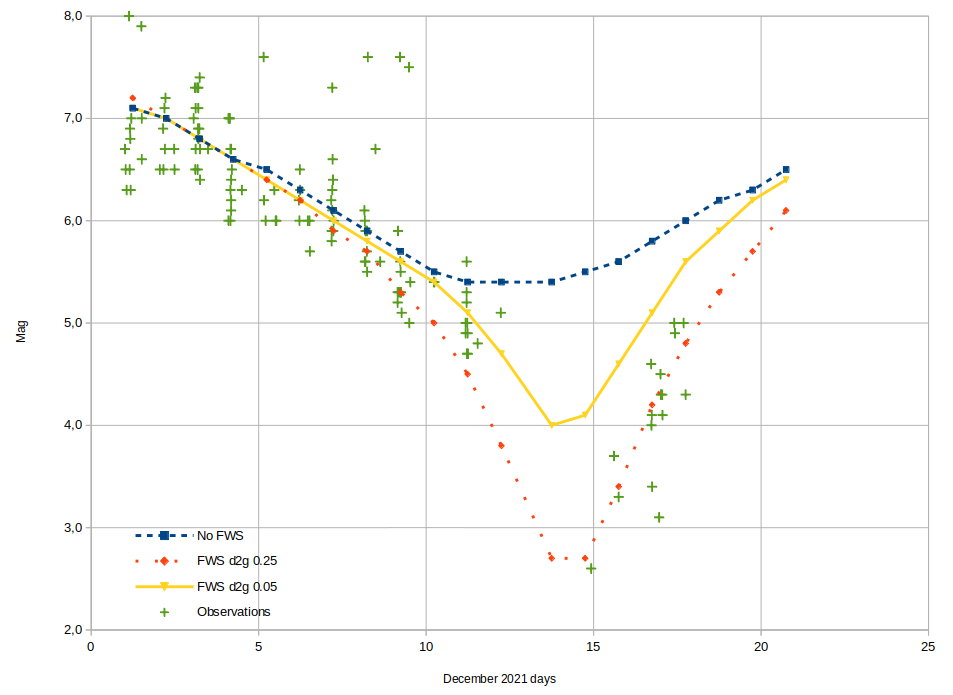 The real size of outburst

Apparently the "outburst" of comet C/2021 A1 (Leonard) was very small, but the increased amount of dust produced from nucleus was heavily enhanced by forward scattering which almost give no addition to magnitude days before. We may estimate that without forward scattering the magnitude increase of comet would be only between 1-2 mag from pre-outburst values for the first day and most likely <1 mag in the days after.

Today, Thomas Lehmann reported another small outburst, while he measured a magnitude 4.5 on Dec 17.78 and 3.9 on Dec 18.78. Due changes in distances from Sun, Earth and forward scattering enhancement we would expect a magnitude to drop by 0.5 between these two days, so additionaly we have observed another ~1 mag outburst, similar size to previous event. Apparently the activity evolution of this comet is very chaotic and uncalm.